on January 11, 2017 By GatesofFreedom In Uncategorized Leave a comment 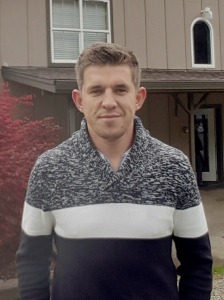 I would like to testify to what God has done in my life. I was raised in an unbelieving (non-Christian) family, and I didn’t know God. I led a bad lifestyle which began with disobedience. Later, I tried the things that the world offered me. The devil trapped me, and no matter how hard I tried to become free from addiction, I was unable.

When I was 17 years old, I moved to America. It was at that age that I first tried drugs. In the beginning, everything was great, but eventually I began to lose everything and bring moral pain to my parents and close ones. I had a best friend, Ilya, with whom I led this bad lifestyle with. His parents and close ones begged God to save him, and God saved him—he repented after landing in jail.

After his time in jail, he went through the rehab program at GOF. While he was in the program, he would ask the GOF family to pray for me. When my friend finished the program, he called me and asked if I wanted to go to the center. I responded that yes, I’d like to come. He told me to prepare my things and said that someone would be by to pick me up. Everything happened so unexpectedly. I said ‘sounds good,’ but the devil tried to place roadblocks in my path. I decided that I’d go no matter what.

During the first month of rehab, God touched my heart. I never cried so much like I did that month—I asked God for forgiveness for my actions and realized just how much I was a sinner.

One time, there was a prayer and the Holy Spirit touched my heart. It was as if someone had raised my arms high and I was unable to lower them back to my sides. I wept and prayed. After that experience, I was unable to fall asleep for two hours. That moment in my rehab, God had baptized me with the Holy Spirit. God taught me how to live a Christian lifestyle. He worked on my character, and gave me freedom from sin and addiction. Believe me, I did not deserve such mercy, but thanks be to Jesus Christ and His sacrifice, I am alive in Him to this day. He is worthy to be praised!